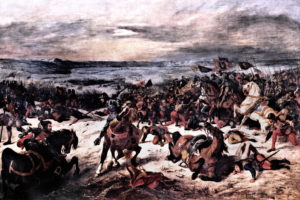 Looking death in the face

The doctrine of just war was developed in medieval Europe to regulate the use of legitimate state violence. But who then bears the moral burden of guilt, because “thou shalt not kill”? And how far is our society prepared to accept losses, especially civilian ones, now that war is on our soil (jihadist attacks) and at a time of “war against the coronavirus”?

France’s neighbours are drawing up a strategy that still lacks coherence: if the position towards the United States is asserted, the other Americas are neglected; the North is unthinking, the East centred on a European vision without much room for manoeuvre. As for the South, our position is very disjointed today. Further afield, in our overseas territories, our mechanism should enable us to promote an Indo-Pacific strategy that is original and distinct from that of our allies.

Lorgnette: Biden and the Middle East

The new US administration has taken initial decisions regarding the Middle East. Thus, J. Biden declared that he wanted to resume the treaty with Iran (JCPOA) by wanting to add the question of ballistic missiles to it. Iran, on the eve of new elections, has not closed the door but remains firm on a strict return to the text signed in 2015. At least discussions are resuming. Without weakness, however: in Syria, strikes were decided against the Syrian Shiite militias after the attack on an American base in Erbil (Iraq).

Simultaneously, a mistrust was displayed towards Saudi Arabia. Washington has reopened an investigation into the assassination of J. Khashoggi (which points to the direct responsibility of MBS) and has declared its declining support for the war in Yemen.

Does this point to a new course? Undoubtedly in the case of Iran, even if it is a question of maintaining a position of strength. For the rest of the region, these initial decisions suggest a more measured and balanced position, both towards Syria and Iraq and towards the Gulf States. Israel is for the moment left a little to one side, as if it were no longer the priority.