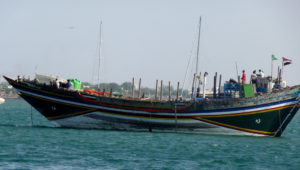 As an established fulcrum at the convergence of the major maritime routes linking Asia and the Middle East on the one hand, and Africa and Europe on the other, which became a strategic crossroads during the Cold War, the Republic of Djibouti’s strategic dimension was strengthened as it entered the 21st century. The subject of massive economic investment from China and home to the military bases of six different foreign countries, with those of China and the United States surpassing those of France (former sovereign power on the territory), this tiny state has engaged in subtle and lucrative diplomacy, not without risks, in order to guarantee its political autonomy, security and development.

2021 will provide the basis for the 2022 election platforms. The recent publication of an Update to the 2017 Strategic Review is part of this framework. The exercise is classic, well-written and somewhat agreed upon, but it serves above all to justify capacity needs. It lacks boldness in the face of undiscerning risks and a new, ambivalent and below-threshold conflictuality, both external and internal. It does not outline a necessary integral strategy. This is a pity.

As soon as he arrived, Joe Biden proposed a five-year extension of the New Start Treaty. Russia agreed immediately. This is good news. New Start was indeed the last arms control treaty in force. Bilateral, it linked Washington and Moscow to limit the number of their nuclear weapons. It was due to expire on 5 February and it is likely that a re-elected Donald Trump would have let the deadline pass, as he had withdrawn from other treaties. This was not the decision of his successor.

The extension means that the bilateral dialogue should resume in a more conventional way, which does not mean that tensions will ease. One recalls the Democratic Party’s obsession with “Russian fraud” and the suspicion of connivance between Mr Trump and Putin. J. Biden will have to take this fringe of his party into account. However, returning to international negotiations is a good signal. Above all, it reopens perspectives on nuclear issues: updating the JCPOA agreement with Iran or dealing with the Treaty on the Prohibition of Nuclear Weapons (TPNW cf. LV 87). We will follow this closely.