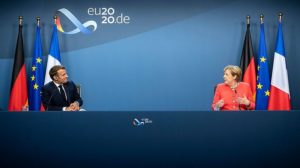 The recent EU agreement on common debt was praised by enthusiasts as a historic step forward, by sceptics as contrary to the interests of the country. Far from being a Hamiltonian moment (a federal leap), it is simply a very long agreement to negotiate, one that has exposed Europe’s tears but has had the merit of existing, albeit a small step. The fact remains that, once again, we will regret the absence of real democracy, not to mention this flamboyant French panache that can be read both as the rest of a sense of the universal and as proof of an indescribable candour, for better or for worse.

The Elysée Palace entrusted an academic with a mission on the Algerian War, with an Algerian academic being in charge of a similar mission in Algiers. These two exercises seem a little vain as they focus on a single period. Above all, on the one hand, the French do not want to hear about it any more and are turned towards something else while the subject is for the Algerian executive an imprescriptible moral drawing right from the beginning, even if the population of the country is connected to the world and dreams above all that they are told about the future and not the past. It would be better to prepare for the future and imagine how the destinies of the two shores can be made to converge better.

In the end, the Covid will have deeper political effects than expected. In Israel, thousands of demonstrators are marching against B. Netanyahu, accused of having deconflicted too quickly and of not installing social measures in the face of the economic crisis. In Belarus, in anticipation of the elections on 9 August, a trio of women are gathering crowds and questioning the absolute reign of the autocrat, accused of not having taken any measures against the pandemic. In the United States, the flip-flop that we were detecting (LV 140) seems to be confirmed as the epidemic explodes and the erratic reactions of D. Trump, who seems to be in a very bad position for re-election. However, nothing is decided yet, but the incumbent has fallen behind. Finally, in Scotland, pro-independence supporters feel that their country has done better than the United Kingdom and polls regularly show a yes vote for separation.

These are all signs that statesmen’s ineffective handling of the COVID crisis can have lasting effects, including on political balances. This is not surprising.

For this sixth summer issue, here are a few miscellaneous readings to entertain you or help you delve deeper into complex subjects which the Covid 19 pandemic has taught us to rediscover the taste and necessity. Enjoy reading these 17 reviews. Don’t forget to re-subscribe and distribute them widely.