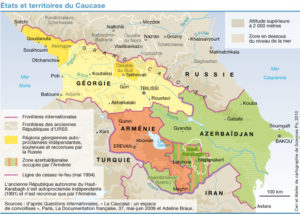 Military strategy must articulate both nuclear strategy and the response to asymmetric adversaries. Without dwelling on fashionable concepts (Hybrid Warfare, A2/AD), let us note the return to concerns of high-intensity warfare, which had been forgotten. Opposition between peers or quasi-peers is back on the agenda, without overshadowing other priorities. 2020 is an opportunity to think calmly before the turmoil of the next presidential campaign and the subsequent LPM.

Azerbaijan is thus on the borders of Europe and Asia, the Russian world and the Middle East, and is of interest to both China and the United States. As a Muslim, Shiite and secular country, it has just presided over the Non-Aligned Movement. Rich in abundant oil, it does not waste this income and succeeds, thanks to skilful diplomacy, in asserting its interests despite the persistent dispute with neighbouring Armenia over Nagorno-Karabakh. These are all exceptions which would almost be worthy of a model and in any case arouse interest.

France convened the leaders of the five G5 Sahel countries at a summit in Pau last week. It asked them, as it were, to confirm their desire to see France intervene in the region, in particular through Operation Barkhane. It was a question of finding political support at a time when the French presence is routinely decried in regional public opinion. In short, to force the said governments to come out of their duplicity. In exchange, France announced the dispatch of 220 additional troops and the refocusing of the operation on the Tri-border region.

220 troops is a 5% reinforcement: no one will believe that this can change the balance of power. As for the concentration on the three borders, it is a change that is at best operative, it certainly has no strategic significance. As for the rest, nothing changes and the stalemate will continue. For the old moons that have been proper and ineffective for decades will continue without changing the political behaviour of the region’s rulers: what if we put them face to face with their responsibilities?

Subscribers: click directly on the links to read online or download the pdf number (here), always with your login/password. New reader: read the article in the issue, by clicking on each article (2,5 €), or by subscribing (abo discovery 17 €, abo annual 70 €, abo. orga 300 € HT): here, the different formulas