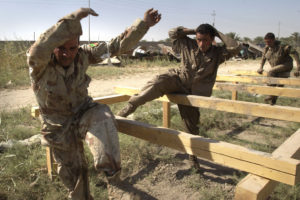 In 2017 no white paper but a strategic review, dense, sober and quickly conducted in the continuity of the strategic work and assessment of 2013. We note its realism and the lucid report that it makes the strategic precariousness of France. One wonders about its European commitment and the desire to increase again the power of defense to preserve a strategic autonomy celebrated. It is to be regretted that the decisive choices regarding the armed forces model are returned to the work of the next procurement programming law next year.

After the defeat of the IS, what will become of Iraq? there are two options: to take advantage of the victory in this civil war to rebuild a state that includes the Kurds (which explains the recent steadfastness towards them in the city of Kirkuk), or to let go of the ethnic game and let the power to the Shiite majority, even to reproduce the Maliki government’s mistakes from 2011 to 2014 and to open the door to the break-up of the country. Baghdad must solve both the external equation and an internal crisis.
Lorgnette : A light in Gaza
JDOK
Link to N° 81
Source The U.S. Army via VisualHunt / CC BY